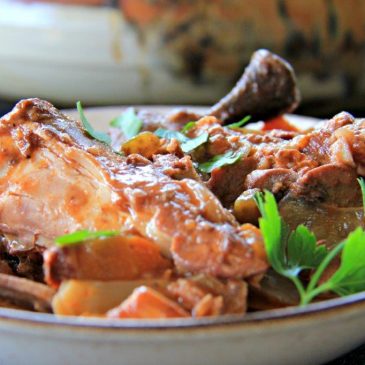 Coq au Vin. This French classic is surprisingly easy to make. Our recipe explains how to perfectly make the French classic dish Coq au Vin in the slow cooker. This recipe, designed for busy people, is just as good as slow cooking Coq au Vin on the stove top. We also pose the question as to whether French cuisine is the world’s most famous? When you look at a list of French classic dishes it is hard to argue against … Read More

Italy has its risotto, the Indian sub-continent has its biryani and Eastern Europe/Middle East has its pilaf. All different methods of cooking rice in stock. Alexander the Great, was reputedly a great lover of pilaf. Roast chicken with pilaf stuffing dates dates back a long time. True to the guild system developed in the royal kitchens, the pilaf makers had their own guild so it is not surprising that pilafs are so popular in Turkey. In the Turkish military in … Read More