Home » A Smoked Beef Brisket Recipe
Required Disclaimer: This post may contain products with affiliate links. If you make purchases using these links, we receive a small commission at no extra cost to you. Thank you for your support. 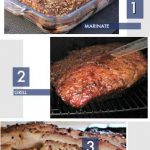 This smoked beef brisket recipe is perfect for a crowd. It will also deliver bragging rights to you for best smoked brisket!

Mention the word barbecue to an American and you are almost guaranteed to receive an opinion on whose is the best style and from which part of the country it hails from. But with this easy barbecue brisket recipe you can make your own at home.

Although the rest of the world associates the word barbecue as the implement you cook on, here in the US it is used to describe food that is slow-cooked. Barbecue is often cooked using some smoke and then eaten with an accompanying, sweetish sauce.

Think of pork ribs, as well as pork shoulder or Boston butt for pulled pork. And then there is slow smoked beef brisket. Throughout the United States there is a passion associated with barbecue that sees no end to determining whose is the best version! This easy smoked beef brisket recipe, which you can cook in the oven or in a smoker, is sure to impress family and friends.

Today on Compass & Fork we feature an easy smoked beef brisket recipe, slow-cooked in the smoker to impart great flavors and taste. A cheaper cut of meat, brisket is just a perfect cut suited to cooking long and slow. When pre-marinated with a brisket rub recipe for smoking and then slow-cooked over smoke for many hours, it is the perfect cut of meat for feeding a crowd.

Fresh from our road trip to the American south, we delve into the history of barbecue. Where did it start and how did it spread around the country?

The Passion of Barbecue in the American South

I make no secret of the fact I love delving into the history of food. In that regard I found our trip to the American south incredibly interesting as to why the diet is so different there compared to the American north. Without getting into too much detail, it is true that after the Civil War, people in the south were desperately short of money, food, everything really. People were forced to eat cheap and easily available food to even survive. Coupled with this the fact many, now freed African Americans were self-made cooks on plantations, they became the chefs of the South. The food they cooked therefore proliferated throughout the South.

Think shrimp and grits, biscuits and gravy and vegetables like okra and collard greens. Rice and corn-based foods became common. It wasn’t just the ingredients that were different. It was also the cooking methods, such as the use of frying, that was introduced by African American migration throughout the South. You can learn more about Low Country Cuisine here.

The History of Barbecue

It was in this environment that barbecue developed. There is little doubt some of the spices used in the preparation of early barbecue was because of African American migration. But the cooking method for barbecue was most likely a result of the Native American practice of cooking slowly over a smoking fire over the course of a day.

As African American cooks and chefs started to move throughout the rapidly growing United States, their barbecue traveled with them allowing local variations to develop. Today, per Time Magazine, there are 4 major barbecue styles: The bottom line is that any of these methods are brilliant. Just pick one and go with it!

Looking to feed a big crowd?

The brisket is first prepared by removing any excess fat and then scoring it to allow the brisket rub recipe for smoking to permeate the meat for a good 24 hours. We are basically using a beef brisket rub for smoking as a dry marinade to deeply impart flavor into the brisket.

How to Cook Smoked Brisket

For a seven pound piece of brisket, I like to allow for about 1 hour cooking time per pound at 220 degrees Fahrenheit (or 105 degrees Celsius).

Place the brisket, uncovered, straight into the smoker for the first half of cooking, basting every hour.

For the second half of cooking, cover the smoked brisket with foil and place back in the smoker to complete the cooking. T

Then remove my slow smoked brisket from the smoker and allow it to rest for 30 minutes.  While the meat rests prepare any fixings to accompany the brisket. The brisket is juicier as the juices develop as a result of the meat being rested.

This might sound like a lot of work but most of it is passive. And the results make it worthwhile. Your family and friends will be very happy.

If you are cooking in the oven, follow the same directions and temperatures listed, but maybe add a small amount of liquid smoke to impart that smoky flavor.

Wondering what are the best wood chips to use to smoke beef? Hickory, mesquite or oak wood chips are perfect for smoking beef.

Looking for something else to cook on the smoker? How about Smoked Turkey or Carolina Style Ribs? 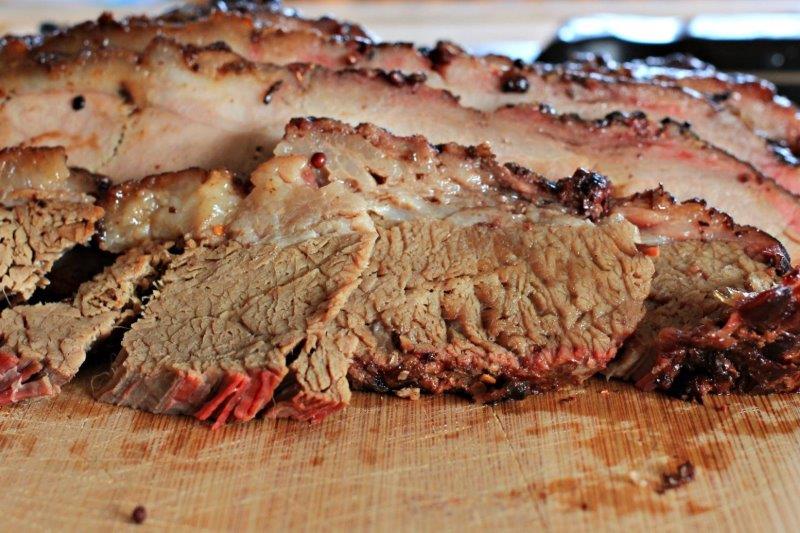 Why easy Barbecue Brisket is the Best
Start the day before by applying the dry rub. Allow all day to smoke the brisket depending on size.
Ingredients
Servings: people
Units:
Instructions
Recipe Notes