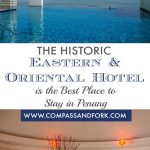 Imagine colonial era Britain at the luxurious Eastern & Oriental Hotel in Penang Malaysia. A review of the Eastern and Oriental Hotel and what to do in 3 days in Penang.

At the height of the British Empire, it was said “the sun never sets on the British Empire,” due to the extensive reach of Britain’s empire, leaving at least one part of its territory always in daylight.. Having established colonies and trade routes which spanned the globe, British culture could be found throughout the world.

With the advent of the luxury passenger liner, wealthy British travelers expanded the scope of the Grand Tour beyond Europe, to the British colonies in India and Asia. Today the legacy of British culture throughout India and Asia remains.

Imagine your own Grand Tour while staying at one of the iconic hotels from this colonial era, the Eastern & Oriental Hotel in Georgetown (or Penang), Malaysia. Also referred to as the East and Oriental Hotel Penang History of the Eastern and Oriental Hotel Penang

Penang is an island, which was an important port for the East India Company. In 1869, with the opening of the Suez Canal and the arrival of the steamship, wealthy European began to travel to Asia. The Eastern & Oriental Hotel was opened to cater to these affluent travelers.

Opening in 1884 as the Eastern, this was the first hotel opened by the Sarkies Brothers, an Armenian family of four brothers, who later opened the iconic Raffles Hotel in Singapore and The Strand in Rangoon (now Burma).

In 1885, a second hotel, the Oriental was built next to the Eastern. In 1885, the two hotels combined to form, yep, the Eastern & Oriental Hotel.

In 1903 a ballroom was added, and the E&O Hotel became known as the center for social life in Penang. Visiting musicians and cabaret acts appeared at the hotel, grand balls were held, and society weddings. (Today it is still a very popular social venue.)

In 1922 they secured an adjacent piece of land and the Victory Annexe added an additional 40 rooms to the hotel. In 1927, it was advertised as “the premier hotel east of the Suez”- with baths with hot and cold running water and telephones in all the rooms.

“the premier hotel east of the Suez”- with baths with hot and cold running water and telephones in all the rooms. – 1927 advertisement for the Eastern & Oriental Hotel

Sadly, during the Great Depression, mismanagement and extravagance left the hotel exposed and it slipped into decline. After changing ownership several times, the hotel has now been remodeled, extended and restored to its former glory.

The Eastern Oriental Hotel is a fantastic place to stay in Penang to relax, unwind and enjoy a little British hospitality. Rooms at the Eastern & Oriental Hotel

All the rooms are suites, and the pool and terrace provide clear, uninterrupted views of the Straits of Malacca.

Consisting of two luxurious buildings- the original part of the hotel, the Heritage Wing, has 100 suites, and the Victory Annexe which was rebuilt in 2013 on the site of the original annex, with 132 suites with balconies facing the sea.

One of the signature items of the hotel’s decor is the “his” and “her” hand basins in all of the bathrooms. The bathrooms also feature claw footed tubs and black and white tiles.

The rooms feature ceiling fans (they have air conditioning as well) in the rooms and even a sarong for you to use during your stay. Through the years the hotel has hosted many dignitaries, celebrities, authors and members of the Royal family. Among some of the more famous; Noel Coward, Somerset Maugham, Herman Hesse and Rudyard Kipling. Photos of some of the famous guests are in the lobby of the Heritage Wing.

The Heritage Wing still offers “Butler Service” and there are call buttons for the butler located in the suites.

We stayed in the Victory Annexe in a lovely room overlooking the pool and sea. Located in the tropics, we retreated from the heat and humidity of Penang each afternoon to relax at the pool. The seafront infinity pool was just too inviting. From 5-6 each day, a complementary cocktail service, featuring canapes with a glass of wine, beer or enjoy an English classic, a gin and tonic, is served in the Planter’s Lounge.

Dining at the Eastern & Oriental Hotel

Breakfast in Sarkies, one of the highlights of our stay, features one of the best breakfast buffets I’ve seen. Your choice of Western, Asian, Malaysian, and other international breakfast favorites including sushi, roti, pho, congee, toast and jams, eggs, bacon, cold meats and cheeses. Anything you could want for breakfast!

At peak times Sarkies can be busy, as an alternative there is quieter, smaller buffet featuring Western breakfast items served in the Planter’s Lounge.

Other lunch and dinner options include Sarkies, the Poolside Terrace (overlooking the sea), the Planter’s Lounge, or Sarkies Corner, located in the Heritage Wing, a coffee shop and bakery with all day casual dining. Fine dining is available in the evenings in the 1885 Restaurant.

Farquhar’s Bar, in the Heritage Wing, offers a long wooden bar inside or some outdoor seating, perfect for drinks in the evening. Every Friday, Saturday and Sunday 12-4 pm there is the traditional English roast, served as an all you can eat carvery.

Other Facilities at the Eastern & Oriental Hotel

Tailoring services, hair dressing, and several boutique shops are available at the hotel. A small museum presents the history of the hotel, including some of it’s milestones and famous guests.

A spa offers massage and beauty services to guests. A Pañpuri Organic Spa, the only one outside of Thailand, the massage rooms overlook the relaxing waters of the sea. A very nice couples room is available. 3 Days in Penang: What to Do

Hot and humid, much of the social life in Penang takes place in the evening when temperatures are cooler. Markets are held early in the morning while food is fresh and has not been exposed to the heat of the day.

Providing an outdoor kitchen and dining options, street food is popular and common.

One of the traditional stops on the Grand Asia tour which also included India, Sri Lanka, Rangoon, Singapore, and Hong Kong, Penang flourished when Captain Francis Light of the East India Trading Company established George Town in 1786. As a duty-free port, immigrants came from all over Asia to settle and work.

Penang was an important center in the 1800’s for the production of spices including nutmeg, clove and pepper. Later tin was a valuable export.

After obtaining UNESCO World Heritage status in 2008, tourism has grown into Penang’s #1 industry. It is Malaysia’s most visited destination and busiest cruise ship port. It is also known for medical tourism and as a financial center (which grew from financing trade since colonial times). Recognized for its “unique architectural and cultural townscape without parallel anywhere in East and Southeast Asia”, one of the largest collections of pre-war buildings in Southeast Asia still stands in George Town.

The Eastern & Oriental Hotel is located within the UNESCO historic district and is walking distance to most of the historical attractions.

The traditional shophouses, a shop with residential accommodation above, line the streets. Unfortunately, many need repair or repainting, and modern-day signs, compete with the traditional facades. Built by one of the wealthiest merchants, Cheong Fatt Tze, in the 1880’s, the large traditional Chinese mansion, now operates as a boutique hotel and a museum.

If you are curious to learn more about the principles of Feng Shui, the guided tour of the house won’t disappoint. Many of the principles are tied to Chinese proverbs such as- “Money should flow in quickly but flow out slowly” which forms the basis for the water drainage from the courtyards to the exterior of the house. With an eclectic mix of nationalities and Confucian and Islamic influences in Penang, there are temples from all religions. Two of the more important temples are the Kuan Yin Temple and the Kek Lok Si Temple,

One of the oldest in Malaysia, the Kuan Yin Temple, built in the early 1800’s to honor the Chinese Goddess of Mercy, Kuan Yin, the temple features Chinese architecture including stone carvings of dragons. Like many Asian temples, devotees burn paper money and incense sticks at the temple.

The largest Buddhist temple complex in Southeast Asia, The Kek Lok Si Temple, is also in Penang. With beautifully-landscaped gardens and a seven-tiered pagoda with a collection of Buddha statues and a 120-feet tall Kuan Yin bronze statue.

In 2010, George Town began “Marking Georgetown”, a series of steel-rod caricatures made by local artists marking historic sites around Georgetown. At present there are 52 sculptures marking everything from where Jimmy Choo first began his shoe making career to those marking local traditions such as mahjong and the local street hawkers.

Other street art including a series of murals and including several interactive pieces.

Known for its street food, including being ranked World’s No. 1 Best Food destination in 2014 by Lonely Planet, the Penang Street Food Guide from Penang Tourism  is fantastic. It lists local specialty dishes and tells you where to find them. Location of the Eastern and Oriental Hotel Penang

At the edge of the UNESCO World Heritage district on the edge of the Malacca Straits, the Eastern & Oriental Hotel is conveniently located within George Town and one of the best places to stay in Penang.

Upon arrival in the Butterworth Station (closest stop to Penang) walk out of the station and follow the signs to the free shuttle for the ferry. The 20 minute ferry costs approximately 30 cents in USD (and you only pay one way). No reservations are required for the ferry. It operates approximately every 20 minutes.

From the ferry terminal in Penang you can walk or catch a bus, taxi or Uber to your destination. Trishaw (three wheeled rickshaws operate in Penang and there is a free shuttle bus, the CAT bus in the historic district. (Keep in mind it can be very hot during the day and walking in the heat is not always a good option.)

Staying at the Eastern & Oriental Hotel

We enjoyed our stay at the historic Eastern & Oriental Hotel. With the classy elegance and historic charm of the waterfront location, you feel yourself relax into a slower pace.

A fantastic breakfast, traditional afternoon tea and a cocktail hour provide plenty of options to enjoy the warm hospitality of the staff. The Eastern and Oriental Hotel at a Glance

We stayed as guests of the Eastern & Oriental Hotel. As always our opinions are our own.

Get an instant ​PDF

ITINERARY and a MAP FOR EXPLORING VENICE.

ONE DAY ITINERARY and get the MAP for exploring VENICE!