Home » Destinations » Learning about the Berber People of Morocco 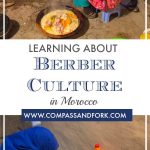 One of the most amazing days of our Morocco itinerary was the day we spent in a traditional Berber village learning about Berber culture. The opportunity to eat traditional couscous, lamb tagine and learn about the lives of the Berber people in the village firsthand is an experience we will never forget.

Greeted by the smell of smoke from the fire and Hanu, Abdul’s mother, a small wisp of a lady that looks very capable, we are made to feel welcome.

Hanu has been up since about 5 am- having milked the cow, fed the sheep and donkey, and made breakfast for herself and then her daughters who are staying with her. Then she started cooking for us. The morning chores done, she is ready to begin making couscous for our visit. The whole process is done by hand starting with wheat flour and a sieve. We have missed the making of the couscous, arriving just in time for the cooking of the couscous and the preparing of the tagine which will be our lunch with our guide, Abdul and his family, in a traditional Berber village and the home in which he lived as a child.

Of his eight siblings, two of his sisters, Kayou and Touda, one brother, Hussein, and one of his many nieces and nephews, Fatima, who is 9, will be joining us for lunch.

In Berber homes, the Friday lunch meal is traditionally couscous. Not the 5-minute kind out of the box, which you add hot water to and fluff with a fork, but the real thing- made by hand, steam cooked slowly over several hours. Since Friday is the holy day and traditionally the family would all be there for lunch, this is a special meal.

As we arrive we head straight for the kitchen, to see the whole process take place. Like many homes, the kitchen is a hub of activity.

If you are wondering how couscous can take 3 hours to cook, let me assure you it was worth the wait. The couscous is cooked in a special pot, a couscousiere, which is really one pot on top of another. In the bottom pot goes vegetables and water, which makes the equivalent of vegetable broth and release fragrant steam through the holes in the bottom of the top pot. The steam in turn, gently cooks the couscous in the top pot.

In a Berber home, cooking takes place over an open fire in the kitchen. With firewood in short supply, they also burn bushes, the leaves of which smoke. We can smell and see the smoke in the kitchen. Like many traditional communities using wood to cook over an open-fire indoors, the ceiling of the kitchen is blackened from years of use. We arrive as the tagine is being prepared and the couscous is about to be fluffed to separate the grains for the first time.

Having been steaming for about 45 minutes, the couscous is removed from the top pot and dumped into a large bowl. In the bowl, by hand, Hanu, gently mixes a pinch of salt and olive oil through the couscous to  Break up the large clumps and aerate the small grains of pasta. Despite the fact the couscous is very hot, this is done by hand. Frequent mutterings of “hot, hot” in Berber are heard as she stops periodically when it is too hot. (In fact, there is not an oven mitt to be seen in the kitchen.)

After, the couscous has been thoroughly fluffed and oiled, it is placed back into the top pot for a further 45 minutes, at which point the process repeats. It is then returned to the stove for its final steam. The process takes several hours.

In the meantime we adjourn to the sitting room where Hussein makes mint tea for everyone. Mint tea is a strong Moroccan and Berber tradition. In Berber homes, and even in hotels, we are usually greeted with mint tea.

Making mint tea, or Berber whisky as it jokingly called, is a bit of an art form. Green tea is added to water which is heated, when it is warm, sugar is added (lots of it) and the tea is removed from the heat. At this point fresh mint is added to the pot. To stir the tea and make sure the sugar and mint are mixed, a couple of glasses are poured from the pot, then poured back into the teapot. You can watch a short video on how to prepare traditional, Moroccan mint tea in an upcoming post.

Ready to serve, the tea is poured from a great height to aerate the tea as it is served (this also helps cool it). A glass of mint tea should have bubbles in it when it is served.

And Hussein makes delicious tea, over the course of the afternoon we have several glasses, each time made fresh following this process, including a glass at the end of the meal.

Tea finished, we head out for a walk around the village and the gardens while the tagine and the couscous finish cooking.

The traditional Berber village has lots of kids and lots of smiling friendly faces. Most homes have animals and washing hanging out to dry. There are communal piles of wood and branches drying in the sun scattered throughout the village.

The homes are built primarily from what looks like clay. I imagine it is a mixture of clay and hay, and for those that can afford it, maybe some cement blocks. It looks like there are a few abandoned homes in the village. When a family moves or builds a new home, the old home is just left standing. It is not worth the effort to tear it down and eventually nature will reclaim it. A Berber tradition, many children receive a plot of land in the village to build their house from their parents when they marry.

People come out to catch a glimpse of us and the kids all wave shyly. We hear the shouts of “peek-a-boo” behind us. Two small children, have run up the street to see us and get our attention. They can’t be more than 3 of 4 years old- very cute!

Electricity arrived in the village about 8-10 years ago and is heavily subsided by the government as the people of the community would be unable to afford it otherwise. We do notice a few satellite dishes on the homes for TV. Mobile phone coverage seems to be everywhere as Abdul’s phone works the whole trip with no issues. (Although internet access at hotels is poor in Morocco.) We walk through the village gardens where each family tends their own vegetables. Common crops include carrots, parsnips, pumpkins and alfalfa, a common feed for the animals.

Living in a traditional Berber village is a hard life with lots of manual work. Water comes from a well in the village. Firewood and food for the animals (especially for winter when snow will fall) must be collected and stored. Most homes do not have heat inside and it is cold here in the winter.

It is dusty in the village as it has not rained in many months. The river bed is largely dry. Nearby, there is a large construction project to fix the road and build a reservoir. This area, which is stunningly beautiful in it’s ruggedness, is prone to flash flooding when it rains. The reservoir will capture and store the water which can be used for irrigation and hydro-electric power. Much of Morocco’s power comes from hydro electric (much to my surprise) and the country is making a big investment in solar power.

A large solar project is being built near Skoura, one of the largest in the world, and with all of Morocco’s sunshine, this will be a great source of clean, renewable energy for the country. Eating with the Family

We return to Hanu’s home just in time for the serving of the couscous. The couscous is served in a large wooden bowl, and the contents of the lower pot, the steam producer, which is full of vegetables and some meat (lamb) and a lovely tasting broth that has been slow cooking for hours, is poured on top.

We head into the main room of Hanu’s house which we have been sitting in for tea. This room has small windows, which keeps it warmer in winter and cooler in summer, but doesn’t allow much light in. We are sitting on what I would describe as mattress, long rectangular pads, covered in beautiful rugs. These are of course handmade by Hanu. Weaving is a skill all Berber women seem to learn and rugs are made from both lamb and camel wool. The patterns and colors tell stories and the dyes are handmade with natural materials. We learned this and much more about Moroccan rugs at the Berber Weaving Cooperative in Tinghir the day before.

Eating in a Berber home is a communal affair, the couscous is served in the large bowl and everyone is given a spoon. We gather around the low table, sitting on pillows covered in beautiful Berber wool rugs which Hanu has made by hand over the years. Very quickly most of the couscous has disappeared!

Normally couscous would be the afternoon meal, but as we are guests, they have also prepared a lamb tagine. At this point I am wondering where I am going to put all this food!!

The lamb tagine, is also served communal style, this time with bread (handmade by Hanu of course) to pick up the hot meat and vegetables. Chicken tagine is also very common in Morocco.

And yes, there was dessert! Fresh fruit including oranges, apples and pomegranate. All followed by mint tea made once again by Hussein.

And this ends our day with Abdul’s family. We are grateful for his family’s hospitality and generosity and it a meal we will always remember.

We traveled as guest of Authentic Berber Tours. All opinions are our own, based on own experience.

Get an instant ​PDF

ITINERARY and a MAP FOR EXPLORING VENICE.

ONE DAY ITINERARY and get the MAP for exploring VENICE!