Home » Go Retro with Wonderful Devils on Horseback
Required Disclaimer: This post may contain products with affiliate links. If you make purchases using these links, we receive a small commission at no extra cost to you. Thank you for your support. Go Retro this holiday season by serving these wonderful Devils on Horseback. Easy to make with only 2 much-maligned ingredients, albeit for 2 totally different reasons.

Together smoky bacon wrapped around prunes is a delightful combination. The sweetness of prunes and the saltiness of the bacon combining to provide a mouth-watering package of divine taste. They are perfect for any finger food situation and they are simple to prepare and cook. It really doesn’t get much easier than this dish if you are under pressure from a time perspective.

In this post we discuss the historic nature of this appetizer and make an argument for why there is actually some health benefit, well at least in one of the ingredients anyway! Bacon is so popular around most parts of the world and prunes, with their undoubted health benefits. It seems like such an unlikely combination but somehow it works and together they are called Devils on a Horseback. Such a great name but where did it come from?

So popular in the 1960’s and 1970’s when home entertaining started to become more commonplace around the world, Devils on Horseback has some history.

As usual with these sorts of things there is some mysticism behind the story of the dish. Devils on Horseback definitely dates back to Victorian times in Britain but the original recipe may in fact have used a different ingredient to prunes, the humble (at the time) oyster. And it may have first appeared in France rather than Britain!

Oysters were frowned upon by the gentry and upper classes in early Victorian times as they were considered to be food for common people. Anyone could forage for oysters and many people living by the seaside did. When bacon was wrapped around an oyster and grilled, Angels on Horseback was discovered and enjoyed by the common people. This likely occurred in France.

However, as oysters became more popular and expensive, the common man started substituting the oysters for prunes and Devils on Horseback was born. This likely occurred in Britain where it seems it was exported to the world. It was certainly popular in the US and I have also read accounts of the dish being invented there. Who knows?

It doesn’t really matter where it was derived as bacon lovers around the world have been forever grateful for this quick and easy morsel, which reached its zenith in the 1960’s and has been on a slow decline since as people experimented with more ingredients.
In recent times bacon and prunes have been much maligned. But I can make an argument why Devils on Horseback has some health benefits!

Although we had an inkling that bacon was not altogether good for you, the World Health Organization made it official by saying that bacon, along with other processed meats, can cause cancer. Here is an article typical of most reporting on it. But it wasn’t all bad news!

Behind the headlines, were 2 other important facts, namely:

bacon could still be enjoyed as part of as healthy diet. I respectfully point out that many long-living cultures include processed meats in their diets. But it is in moderation and part of an otherwise very healthy diet containing lots of vegetables.

The bottom line is to buy higher quality bacon and enjoy it once a week or so.

And as for prunes, they have been more-maligned than bacon, but for altogether different reasons. With that dark, almost black color they are not the most attractive dried fruit going around. As a great remedy for constipation, kids have been for years given this frightening looking dried fruit when they have not been at their best. And that name! It doesn’t conger up a vision of yumminess at all, I’m afraid.

In fact, in some parts of the world, they have officially changed the name from prune to dried plums (which is all they are). Someone has taken a leaf out of the New Zealanders book, unilaterally changing the name of Chinese Gooseberries to Kiwi Fruit, surely the greatest marketing coup of all time!

But the health benefits of prunes are not in dispute. Here is a list:

A prune that has been cooked takes on a softer texture and a richer taste. So it seems to me if you are going to be naughty and have some bacon, why not wrap it around those prunes and at least gain from the health benefits of the prunes?

That’s my justification and that being said, enjoy these Devils on Horseback. 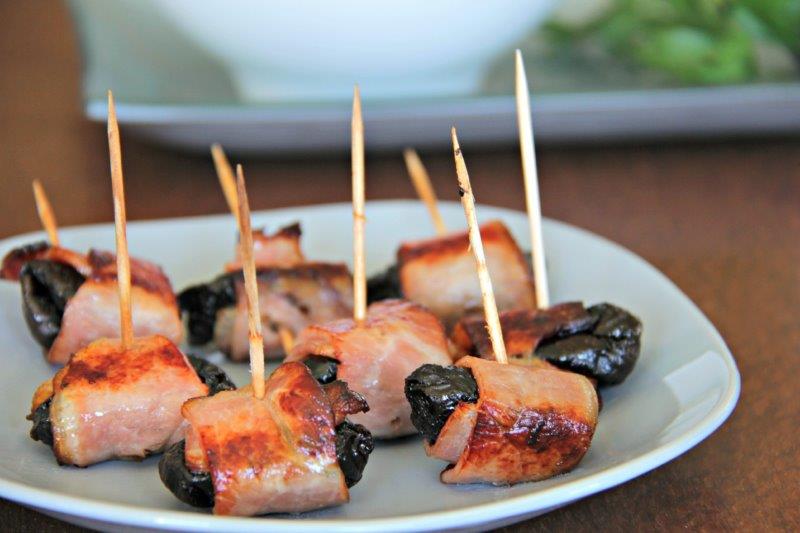 Go Retro with Wonderful Devils on Horseback
Looking for a simple, easy to make and quick morsel as a finger food? Go with Devils on Horseback. With cooking, the prunes become juicy and full of flavor and the slight saltiness and smokiness of the bacon is a great contrast. Also great on the BBQ!
Ingredients
Servings: people
Units:
Instructions
Recipe Notes

I have seen other recipes where the prunes are soaked in alcohol (such as brandy) prior to being wrapped in bacon. Yum.