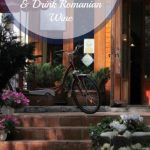 Traditional Romanian cuisine features a number of popular foods in Romanian: polenta, Transylvannian goulash, veal and pork are common, cabbage, duck, and pork knuckle are also common on menus and at home.

Since we are in Bucharest, here’s a list of our top picks for where to find traditional Romanian food. Based on the philosophy of serving food like your mama would make at home, La Mama has several locations throughout Bucharest. The menu features many traditional foods in Romania and is a good place to learn about traditional Romanian cuisine.

The menu features stews, goulash and many other items we did not see on some menus around town. The food is homestyle, hearty without much in the way of frills. Much like your mom would make at home.

Menu options include- duck legs in cabbage, Transylvanian Goulash (veal), a traditional stew (including chicken livers and chicken pieces) and Pork Knuckle. Prices are reasonable and it is worth a visit to try some traditional Romanian cuisine. Vatra is one of many restaurants in Bucharest with a lovely courtyard for outdoor dining. The setting is lovely and the food is traditional Romanian.

A stop on the Delish Experiences Tasting Tour (see below), this restaurant was a great find. Featuring what was described as traditional Romanian peasant food the eggplant dip and cabbage rolls were outstanding.

A very pleasant setting for a leisurely lunch or a summer dinner outdoors. Prices were reasonable.

More in the fine dining category, the Concerto Restaurant in the Grand Continental Hotel, has a classy atmosphere. The menu reflects what the elite of Bucharest would have eaten during the war period. One of the highlights was the momite, the traditional Romanian version of what I would describe as Spanish croquettes.

If you are looking for an elegant meal, Concerto makes an excellent choice.

Where to Find Romanian Wine in Bucharest

A couple of wine bars in/near the Old Town in Bucharest offer a chance to both learn and try some Romanian wines.

The history of Romanian wine production dates back over 4000 years. Today Romania is the 6th largest wine producer in the EU, behind France, Spain, Portugal, Germany and Italy. The Romanian wine industry provides jobs for over 1 million people.

Be aware that due to a lack of refrigeration, white wine is often not served chilled. Instead ice is provided to add to the wine. The host is knowledgeable about wines and can explain about the varietals and wine regions of Romania. If you appreciate good wine, it is a wonderful place to increase your knowledge of Romanian wine.

Meaning “Bread and wine”, Paine si Vin, is a casual wine bar which also serves light snacks. A selection of Romanian wines is available by the glass or bottle. We went in a group and ordered several bottles allowing us to try several wines from around Romania.

Winestone at the Novotel

Inside the Novotel Hotel on Victoriei Street, on of Bucharest’s main boulevards, you find Winestone. This wine bar features a selection of Romanian wines by the glass or bottle. Food is also available and there are some excellent tasting platters to enjoy with a glass of wine.

Learning More about Romanian Wine on a Wine Tour If you would like to learn more about Romanian wine, you can take a wine tour. We traveled outside the city and visited a couple of wineries. This was a full day tour and included a stop at the family home of Alexandru Bellu, which is now a museum. You might recognize the Bellu name from the large, famous cemetery in Bucharest which bears the Bellu name. Alexandru donated the land for the cemetery.

The traditional Romanian home itself it rather unique in Romania as the furnishing are the original furnishings. The home was left untouched during the communist era. The old wine cellar has a collection of wine making tools and barrels.

In a stunning rural setting the first winery, LaCerta, is a modern high-tech winery. We visited all aspects of production and sampled the wines.

Authentic Romania was the host for our wine tour. They offer a variety of day trips and multi day tours around Romania. If you would like to explore traditional Romanian cuisine there are several good options for tours within Bucharest.

Delish Experiences’ Tasting Bucharest Tour visits several local restaurants linking the food tastings with the culture and history of Romania. If you love learning about history and culture through food and stories you will enjoy this Delish Experiences tour. The Bohemian Bucharest tour is an opportunity to walk through several of Bucharest’s ethnic neighborhoods including the Armenian and Jewish quarters. The tour also visits the largest market in Bucharest, the Obor Market. Along the way you learn about the food, culture and history of Bucharest sampling beer, cheese and other local favorites.

The Interesting Times Bureau features day tours of Bucharest catering to a variety of interests and food tours as part of Intrepid’s Urban Adventure Tours.

The Garlic Culinary Tour looks at the use of garlic in traditional Romanian cuisine and the legends, think vampires, that surround garlic. Unfortunately, this popular tour was booked out when we were there and while we heard wonderful things about it, we didn’t get the opportunity to go. If you would like to learn more about it, check out Nathan’s review on the Foodie Flashpacker.

We visited Bucharest as guests of #ExperienceBucharest, a five-day event featuring media and influencers from all over the world.