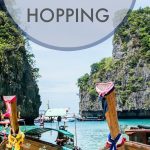 There are over 300 islands off the coast of Thailand, most located either in the Gulf of Thailand or in the Andaman Sea; the latter is on the west coast of both Thailand and Myanmar. Island hopping in Thailand ranges from simple to difficult; some of the islands are more populated with better types of transportation available than others. Phuket, the biggest island in Thailand, has its own airport, for example. The smaller and less populated islands often are only  reached by boat.

Thailand’s travel seasons generally fall into three categories. The high season, which sees the most tourists, takes place between November and March and has relatively dry and cool weather. The Western holidays of Christmas and New Year’s see a lot of crowds and inflated prices.

The low season, which coincides with monsoon season, takes place July to October. Some of Thailand’s islands, particularly the smaller ones, close during this time, as do some of the boat companies.

Which Islands to go to in Thailand?

Phuket is not only a destination in its own right, it is a gateway to other, smaller Thai islands. It has ferries and many tour boat companies. While it is best known for its party scene, Phuket does offer quieter pleasures like the 29 Buddhist temples and the Sirinat National Park. The latter is home to the Mai Khao Beach that, at 11 kilometers (6.8 miles) long is the longest beach on the island. Chalong Bay is the biggest town, and it has a port providing transportation to some of the other islands. The biggest beach resort is Patang, and it is the source of much of Phuket’s reputation as a party island.

Koh Yao Noi is one of the best quiet islands in Thailand. It still offers a range of activities like snorkeling, biking or taking lessons in Thai cooking or martial arts. Its beautiful beaches are uncrowded and pristine. Koh Yao Noi doesn’t have the rowdy nightlife that some other islands do, but it does have a few restaurants and bars worth visiting, including a couple of good Italian and French restaurants. Getting to Koh Yao Noi involves taking a boat from another island, and the prudent traveler should check the hours of any ferries or boat trips. A Koh Yao Noi resort will offer goods and services that may not be available elsewhere, for the island is still quite undeveloped. Koh Phi Phi became famous after as the setting in the 1990 movie “The Beach.” It is actually a group of small islands near Phuket. Reaching Koh Phi Phi is thus a straightforward matter of going to Phuket and then taking a ferry from Phuket to Koh Phi Phi. Like Phuket, it is crowded and has a party scene. Koh Phi Phi also has some good spots for snorkeling.

The Mu Koh Surin National Park, which was established as such in 1981, consists of a group of five islands, the Surin Islands, and the surrounding sea. About 76 percent of the park is water. The park’s headquarters are located on Koh Surin Nuea, one of the two larger islands in the archipelago. The park is open from October 15 to May 15 and closed during the rainy season. Its white beaches and diverse coral reef life make it popular with beach-goers and divers. The only way to reach the park is by boat.

The seasons are actually a bit different in the southern Gulf of Thailand. The biggest difference is monsoon season takes place from November to March – which is high season elsewhere. Koh Samui, Koh Phangan, Koh Tao and Koh Nang Yuan are all in the south and thus get monsoons and typhoons during those months. Like Phuket, Koh Samui is often used by travelers as a “base camp” where they stay while exploring the surrounding Thai islands. It is part of the Chumphon Archipelago along with Koh Phangan, Koh Tao, and the islands in the Mu Koh Chumphon National Park. It has an airport and a ferry. The island is popular with divers and snorkelers, for it is the home of the Ang Thong National Marine Park. Other things to do in Koh Samui Thailand include going to the Samui Aquarium and Tiger Zoo. The Laem Sor Pagoda is considered one of the island’s most important shrines, and the Wat Khunaram is its best-known temple.

Koh Nang Yuan is a small island near Koh Tao. The easiest way to reach it is to fly to the Chumphon Airport and then take either a ferry, a catamaran or boat taxi. It is privately owned, so there is only one resort, the Nang Yuan Island Dive Resort. In addition to providing accommodations and access to the beach, it also operates a coffee shop, restaurant and a diving school. Visitors may also take the “viewpoint hike” during which they climb to the island’s highest point to enjoy the view.

Koh Tao is also known as “Turtle Island,” and it is one of the smaller islands in the Gulf of Thailand. It is also part of the Chumphon Archipelago. The peak tourist seasons are from December to March and July to August, while monsoon season runs from November to January. The nearest airports are the Chumphon and Samui airports, and both offer ferries to the island. Koh Tao offers many diving sites and is particularly popular with scuba divers. There are also a number of diving schools. Other activities include sailing, rock climbing and taking courses in yoga, cooking or massage.

About the author: Riya is an inspired writer, passionate about traveling, lifestyle and encouraging startups. She understands the importance of productivity at work and never stopped finding new ways to create her work productivity.

Her favorite countries include USA, Japan, Singapore, and Thailand. Meanwhile, she can never travel without her camera, smartphone and yes! makeup. Twitter, @sanderriya.