Home » Why You Need to Know this Easy Romanian Zacusca Recipe
Required Disclaimer: This post may contain products with affiliate links. If you make purchases using these links, we receive a small commission at no extra cost to you. Thank you for your support. This Romanian zacusca recipe showcases Romanian food and is testament to how the locals continue to uphold the many, Romanian traditions, so evident when traveling around the country. Zacusca is a smoky, Romanian eggplant spread. Some people call it Romanian eggplant salad. It is delicious spread on good crusty bread.

In addition to the eggplants, red bell peppers, tomatoes and onion form the basis of this healthy dish. This Romanian zacusca recipe will yield enough to fill a 24 ounce (700ml) sterilized jar. And, you can comfortably store the zacusca for up to 6 months.

The smoky taste comes from charring the eggplants and red bell peppers on an open grill, heated by gas, or flames from wood. You can achieve a similar result inside if you have a gas stovetop or you can do what I did and place them under an electric broiler until you achieve a char on the vegetables. However, make no mistake, Romanian traditions dictate the proper way to char the vegetables is by cooking them outside over an open flame.

Cooking outside over an open flame is a big Romanian tradition, and you will see it everywhere when traveling around the country. Many Romanian recipes are adapted to permit this great love of outdoor cooking over an open fire. Read on to find out more about typical Romanian food.

You can’t go to Romania and not partake in polenta. That is not possible as it is almost served with everything! Make sure you try bulz (or balmos), simply sheep cheese inside a ball of polenta and heated on a grill. It’s an old shepherd’s meal in Romania. Shepherds still exist in Romania and you will see many of them in the rural areas tending their flocks.

Sheep’s cheese and mutton stews also feature heavily in Northern Romania. And testament to upholding food traditions there are festivals held at different times of the year as shepherds guide their flocks into the mountains over summer and again when they return at the end of summer.

Speaking of summer, like many cultures, Romanians love to grill out. That means there will be no shortage of mici. The unofficial national dish of Romania, mici are skinless sausages that are simple to make at home and go beautifully with a green salad, some hummus and wraps. As you might expect in an Eastern European country like Romania, the mici are traditionally made from pork and pork is without doubt the predominant meat consumed in Romania. Expect to see many different types of smallgoods made from pork. Smoked pork fat (called slanina) is also common and is often served at parties on large platters, along with various (pork) sausages and ham.

Romanian pork goulash is another example of typical Romanian food. Simple to make and true comfort food. And, usually served over a bed of polenta.

Romanian soup, including mushroom soup and meatball soup, features heavily on any list of typical Romanian food. Romanian winters are cold, so no surprise there.

Cabbage and other heavy, winter vegetables are also common in many Romanian recipes, including the rather famous Cabbage a La Cluj. One of the things we love about traveling in Romania (twice now) is the enthusiasm of the locals to showcase their homeland and its traditions. There has been a concerted effort in Romania to ensure these traditions are not lost because of “progress”. And this makes a trip to Romania a great value proposition because you are going to observe costumes, foods and traditions dating back centuries that you won’t see anywhere else.

There are many food traditions in Romania. The first you will notice is the traditional welcome greeting of the bread and the salt. We struck this everywhere when arriving at restaurants and functions. Simply dipping a small piece of bread in salt and popping it in your mouth. And, always held by someone dressed in traditional, Romanian costume (male and female). A nice touch as you will see at the start of th short video in this article.

The first time we visited Bucharest, a large city, I was surprised to see someone cooking polenta outside over an open fire. But that was nothing compared to the many meals we saw being prepared over open fires with large pots dangling over them in places like Bukovina and Sibui.

Romanian traditions dictate all manner of soups, stews and polenta are to be prepared this way. It’s interesting for a tourist and for us it was a great way to spend more time outside in the beautiful, Romanian countryside.

And, as you have already probably gathered, a Romanian zacusca recipe is another typical Romanian food. If you enjoy making home-made dips, relishes and spreads that you can store away to bring out whenever guests arrive at your doorstep, then this Romanian zacusca recipe is for you.

It’s healthy, vegetarian (vegan), gluten-free and paleo compliant. The recipe makes enough to fill a large, 24 ounce (700ml) sterilized jar or you can place into smaller, sterilized jars. You can happily store it for up to 6 months, just keep it in the refrigerator, once opened.

Romanian zacusca is delicious on crusty bread or ciabatta or just served with a platter of raw vegetables such as carrot and celery and used as a dip. We also usedit in lieu of tomatast paste on pizza. You can optionally add a de-seeded red chili, if you want some extra bite, which won’t overpower the zacusca.

Much like baba ganoush, the secret to our Romanian zucusca recipe is achieving the smoky flavor when you grill the eggplants and red bell peppers.

At the time of serving, you can add some chopped parsley for a little green color to contrast against the deep red color of the zacusca. 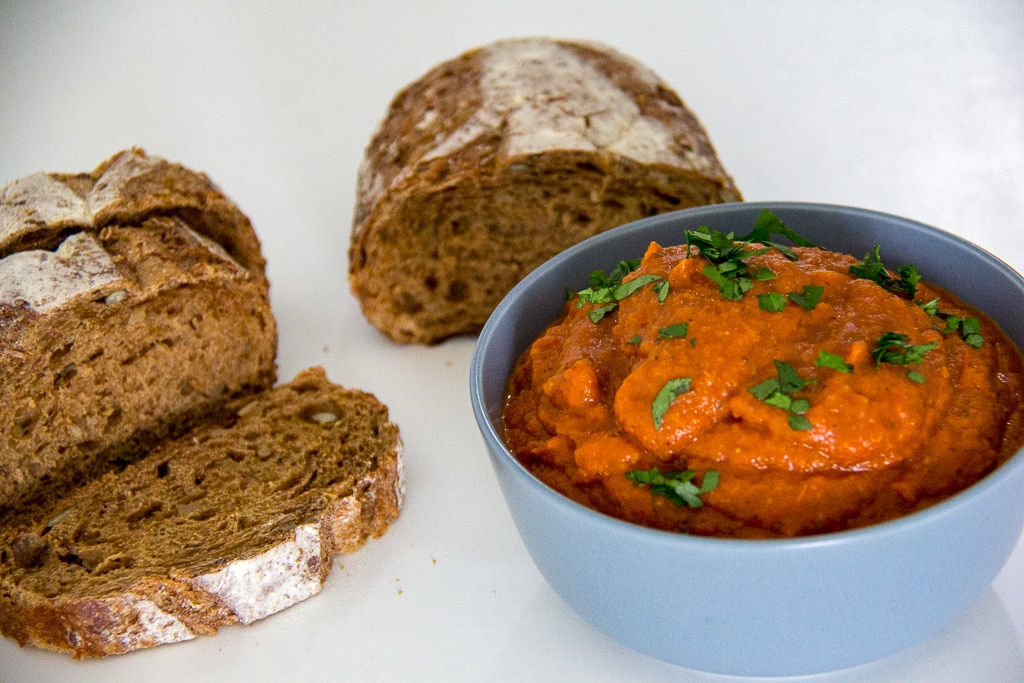 We were fortunate to spend two weeks touring Romania as part of #ExperienceRomania.  The tour was organized for members of the media by a group of passionate volunteers working to increase awareness of Romania and promote tourism in the country.

If you have any questions about things to do in Romania, please leave a comment below (no URL is required.)