Home » Introducing the Dragon Warmer Fruit Cocktail Recipe from Bhutan
Required Disclaimer: This post may contain products with affiliate links. If you make purchases using these links, we receive a small commission at no extra cost to you. Thank you for your support. This fruit cocktail recipe might just be the surprise packet at your next party drinks or holiday cocktails event. Rum cocktails are ever popular, but here is one with a difference as you serve it warm. And of course, with a name like dragon warmer there is bound to be a story to it. And indeed there is.

The mystical, Kingdom of Bhutan, high in the Himalayas, reveres the dragon. So much so, a dragon appears on the flag of Bhutan. The weather in Bhutan can be chilly. If you are trekking in Bhutan then a fruit cocktail recipe like this is just the thing you need to warm you up at the end of a great day!

But you don’t need to be trekking in Bhutan to enjoy these rum drinks, they go down very easily anywhere and are simple to make. It’s also great for party drinks as it is easy to make a batch for a crowd.

But before we get to Bhutan’s fruit cocktail recipe, here is some more information about the Bhutan drinks scene.

Bhutan is off the usual well beaten tourist path. But the land that gave the world Gross National Happiness is just full of surprises. And the Bhutan drinks scene was one of those.

Beer is without doubt the most popular drink in Bhutan and Druk brand is the most popular, especially the 11000 Strong Beer, coming in at a whopping 8% alcohol content. And the craft beer revolution has reached Bhutan. Red Panda Weiss Beer, made in Bumthang, and available in some restaurants is very good.

Bhutan makes red and white table wines. Who would have thought Bhutan drinks would incorporate wine?

And let’s also briefly mention spirits. Quite a range of local distillers now make all the major spirits. On the whisky front, we tasted K5 (for the 5th King of Bhutan), Bhutan Highlands and the Coronation Silver Jubilee and they were surprisingly good.

Bhutan also makes quite a bunch of dark rums, which are very popular and form the basis of today’s fruit cocktail recipe.

Interestingly, the Kingdom of Bhutan has decreed Tuesdays to be “dry”, with no alcohol sales. On Fridays, for those planning on driving, it is zero tolerance day, if stopped and breathalized, you need to be at .00. There is also signage along the roads warning of the dangers of drinking and driving, often in a humorous manner, but which make the point. One great example, “driving after whisky is risky!”

The Significance of the Dragon and the Flag of Bhutan

But back to the story of the dragon and its significance in Bhutan. India, to Bhutan’s south, used the word “Bhutan” to describe the highlands to the north. It’s a very appropriate name.

Tibet, to Bhutan’s north, described the land to the south as the land of the Thunder Dragon because of the thunder and lightning often seen over the mountains and thought to be from the dragon living there. Clearly mythology plays a big part in this, but the Bhutanese take it very seriously and to the point where the Thunder Dragon, called Druk, adorns the flag of Bhutan. Many company names in Bhutan incorporate “Druk” into their brand names, including the aforementioned beer.

Here is a 30 second read on the significance of the dragon and a viewing of the flag of Bhutan.

We first enjoyed this warming fruit cocktail recipe after hiking in the famed Phobjikha Valley, one of several places around or near the Himalayas purported to be the mythical Shangri La.

We enjoyed it again, after climbing to Tigers Nest, the famous, cliff-hugging monastery, an absolute icon of tourism in Bhutan and deeply sacred to the Bhutanese. The previous night’s snow made these pictures even more spectacular, so stay tuned for an upcoming post to see trekking in Bhutan at its finest.

The Dragon Warmer itself is a very, simple fruit cocktail recipe guaranteed to warm you up. As you enjoy your drink, think about the mystical land of Bhutan and just imagine Druk, the Thunder Dragon, swooping through the magnificent valleys of Bhutan. 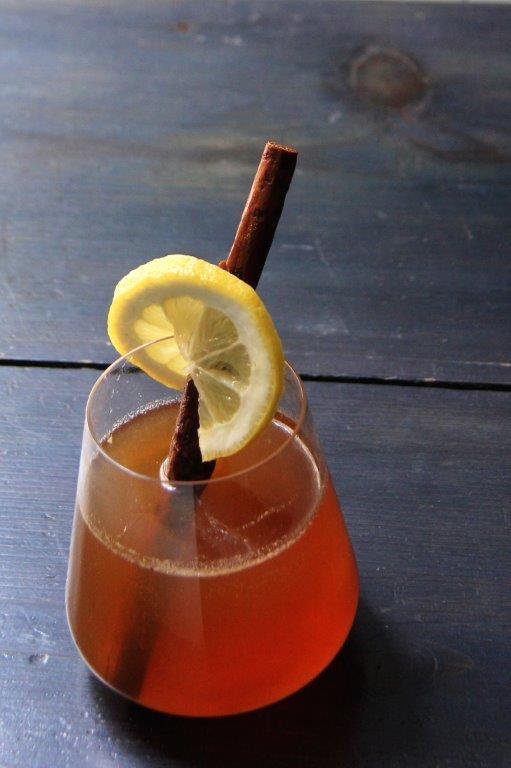 Introducing the Dragon Warmer Fruit Cocktail Recipe from Bhutan
To successfully make this fruit cocktail recipe, make sure you simmer the cinnamon quill in the apple juice for 5 minutes or so. The drink is typically served in wine glasses.
Ingredients
Servings: people
Units:
Instructions
Recipe Notes

We traveled Bhutan as guests of Yangphel Adventure Travel. As always, all opinions are our own. A NEW CULTURE & CUISINE EACH MONTH

Straight to your Inbox!!