Home » An Easy, Authentic, Moroccan Chicken Tagine Recipe
Required Disclaimer: This post may contain products with affiliate links. If you make purchases using these links, we receive a small commission at no extra cost to you. Thank you for your support.

Magical, mystical Morocco! Our authentic, Moroccan, chicken tagine recipe is full of exotic flavors from this colorful and diverse country. A Moroccan tagine recipe is easy to make with everyday ingredients and you don’t need a tagine pot to make it! Watch our video of a Moroccan, Berber family cooking tagines at home. And, how common are tagine restaurants in Morocco? Well I can answer that one straight off the bat. They’re everywhere and the range of tagines available on a menu is almost beyond imagination. We will take you through some of our favorites and where to find them. It’s one thing to enjoy what you might think is an authentic, Moroccan, chicken recipe in a restaurant, but how do everyday Moroccan people cook with a tagine pot?

We were very fortunate to be invited into the home of a Berber family to discover the answer to that question. Let me assure you, it is not the same experience as a restaurant and it was a fabulous opportunity to observe eating habits in Morocco. It was one of the highlights of our trip. An experience we will never forget and a reminder of how resilient Moroccan people are in what really is a harsh and unforgiving landscape. Make sure you view the video, it is illuminating.

If you were to ask the question, “What is Morocco famous for?”, a very common answer would be, “Chicken tagine with olives and lemon”. And, another answer would be, “Tagine pot”. The very name, tagine congers up vivid images of Morocco and exotic flavors.

But what actually is a tagine? Is it a cooking vessel or is it a whole, separate genre of Moroccan food recipes? Today, we answer these vexing questions.

I think it’s fair to assume when someone speaks the word, “tagine”, most people would associate the word with Morocco. However, the truth is, tagines are common right throughout northern Africa and the Middle East.

What is a Tagine?

The original tagine, which can also be spelled tajine, came into being around the ninth century AD as an unglazed, earthenware pot used as a cooking vessel. It consists of two parts, being a round, shallow dish which holds the food, including some liquid and a conical shaped lid. When fitted to the base the lid creates a seal allowing the food to be cooked over a fire with the food being slowly steamed inside. Today, you can purchase a variety of tagines made from different materials. Unglazed, earthenware tagines are extremely common in Morocco, they do well over an open fire and can also go straight to the table for serving purposes. There are also glazed and beautifully painted versions of the same pot, but these are almost certainly just used to serve the food and not as a cooking vessel, as they would crack in the cooking process.

Earthenware tagines look fabulous, but they are not always  practical. There are still a surprisingly large number of northern African people who are nomadic and on the move. Or, if you want to cook on a stovetop, a metal version of a tagine may be more practical. There are plenty of these options on the market, including some very high-end brands. The better brands might be more expensive, but you can use them in the oven or stovetop or even an open fire, if you are so inclined.

Let’s now turn our attention to the actual food and discuss what you are likely to receive if you order a tagine off the menu in Morocco.

Ordering a Tagine at a Moroccan Restaurant

I couldn’t wait to taste my first authentic, Moroccan, chicken tagine recipe. But alas, the first restaurant we ventured into, only served a lamb tagine!

When you arrive in Morocco for the first time, notice the sheer number tagine pots everywhere, as well as the incredible variety of choice as to which tagine menu option you are going to order. Here are some of the tagines we tried in Morocco and where you can order them.

The lamb shank tagine served with pear and dates at Loft in Essaouira was delightful. Beautifully slow cooked, the pear was a pleasant surprise and the dates sublime. We enjoyed an equally good version of lamb shank tagine in Fes, at Dar Halim.

The fish tagine at La Table Madada in Essaouira was another, outstanding dish. Using fresh John Dory from the morning’s catch, it was simply magnificent. I never thought about using a tagine to cook seafood and this meal has totally changed my mind. You can read more about the charming seaside town of Essaouira here.

The turkey, egg, date and sesame seed tagine at Hotel Riad Bouchedor, in the High Atlas Mountains was another complete surprise and a good one. It was Thanksgiving and we thought there would be no chance of turkey until we were served this for dinner!

As you can see, the range of tagines to enjoy in Moroccan restaurants appears endless. But, I realized upon being served my very first tagine in a Moroccan how our assumptions about food from far away lands can be totally off the mark! How my Tagine Preconceptions Led me Astray

It was with some excitement when I ordered my first tagine in Morocco, the lamb shank tagine in Essaouira. I was looking forward to the lamb, a range of vegetables like carrot and potato, as well as couscous, all cooked in the tagine together enabling the flavors to meld. Oh, but how wrong I was! What was served was just the lamb, looking somewhat overdone (it wasn’t), and rather lonely in this individual-sized, small tagine with half a pear and a couple of dates!

I almost felt letdown and thought there must be a mistake! If you look at most recipes for tagines from Western sources, they consist of similar ingredients to what I described at the top of the previous paragraph. But alas, that is not what happens in most Moroccan restaurants. Each time we ordered a tagine it was basically the meat, the whole meat and nothing but the meat (or fish). Couscous was always served separately to the tagine meat (or fish).

Here is another preconception about tagines in Morocco. In restaurants the tagines are generally prepared in normal pots and then served in one of those decorative tagine pots I described above.

So, my Western preconceptions of tagines in Morocco were both totally destroyed. But, I hadn’t totally given up hope, as I knew we would be enjoying a tagine when dining with a Berber family in the magnificent Atlas Mountains of Morocco. Let’s see how they prepared a tagine in a real, house kitchen, rather than a restaurant.

Preparing and Eating Tagine in a Berber House

Another highlight of traveling in Morocco is to experience the High Atlas Mountains and a trip out to the Sahara Desert. It’s a different lifestyle compared to major cities like Marrakech and Fes. In this part of the country there are many Berber people, including some who are nomadic. Our guide and driver Abdul, a Berber, was a very friendly fellow and he kindly invited us to his mother’s house (and where he himself grew up). There we would enjoy home-made lamb couscous as well as a lamb tagine.

Abdul explained eating a tagine in a high turnover restaurant means shortcuts need to be taken to ensure each guest receives a high quality meal. I am also very pleased to report in the family home the meat and the vegetables are both cooked in the tagine pot ensuring the lamb stock naturally flavored and helped cook the vegetables. At the same meal we were also enjoying a totally separate course of lamb couscous.

Abdul’s mother prepared this meal and all I can say is that after spending the whole day with her and some of her family, I have an incredibly high regard for her kinfolk for not just surviving but flourishing in a fairly harsh environment. If you want to see what I mean, check out this short video of our lamb tagine, prepared in the family kitchen. Note the use of bare hands to move around the charcoal!

We enjoyed that lamb tagine immensely and we also ate it communal-style, by dipping chunks of bread into the tagine.

And now it is time to turn our attention to our lemon chicken tagine.

Firstly, you do not require a tagine pot to produce a first-class result. I do own a tagine which I love, but I was cooking this recipe in Malaysia, and I had to make do with what was available. It was actually a wok! A heavy-based saucepan is fine for our authentic, Moroccan, chicken tagine recipe.

If you can, use preserved lemon. You can buy them at good delicatessens or specialist stores. Don’t stress if you can’t find them. In Melbourne, I would normally buy my own preserved lemons but as I was in Malaysia and could not find them, I made do with the skin of normal lemons. 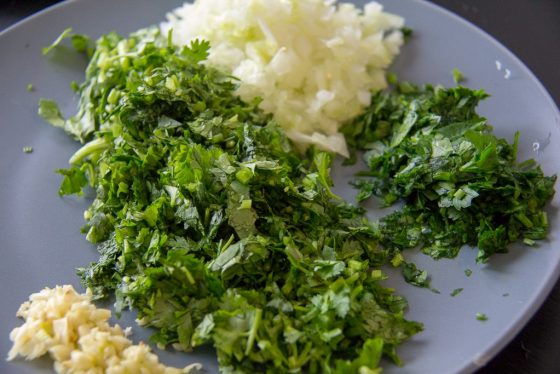 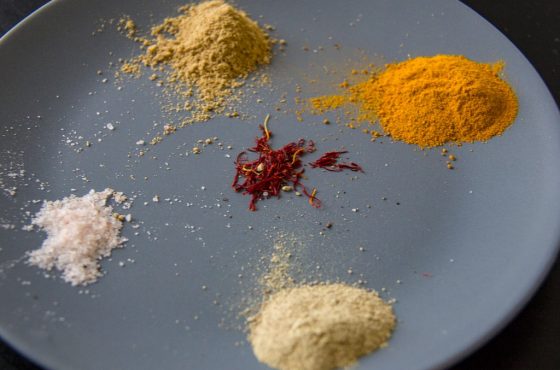 The recipe calls for Chicken Marylands (quarters). That’s the combined drumstick and thigh and do not remove the bone. The bone helps protect the meat, so it doesn’t dry out. If you wish you can separate the thigh from drumstick and you can shorten the cooking time a little. I don’t recommend you use chicken fillets as they just don’t work in this dish.

The important spice in this dish is saffron. Saffron threads are the world’s most expensive spice. You need very little for the dish and if you want to experience the deep depth of flavor and you can afford to buy them, then I would use the threads. If that’s not your thing then use saffron powder, which is what Abdul’s mother used and I am sure what most restaurants use in Morocco. You will still achieve a lovely result. 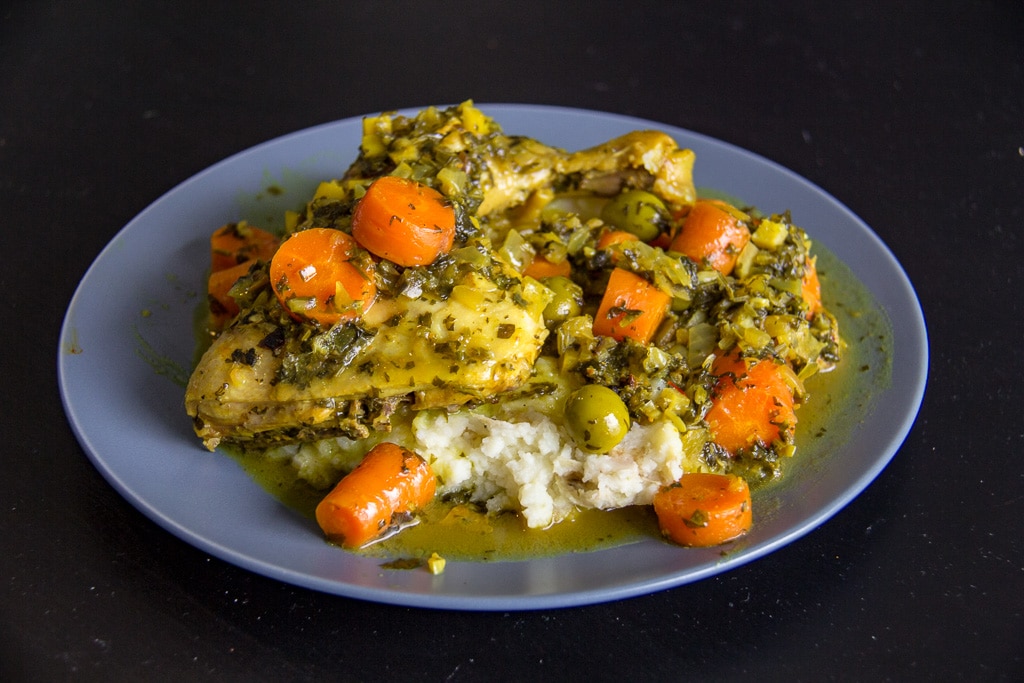 An Easy, Authentic, Moroccan Chicken Tagine Recipe
You can successfully cook this tagine recipe in a heavy-based saucepan. It's a good idea to marinate the chicken pieces for an hour if you have time. Then its a matter of searing the chicken, adding most of the ingredients and allowing to simmer for 1 hour, before adding the final ingredients and a further 15 minutes of cooking. You can serve over mashed potato, or for a Moroccan touch, couscous (not gluten-free).
Ingredients
Servings: people
Units:
Instructions