Home » Shopska Salad from Bulgaria is the Perfect Choice
Required Disclaimer: This post may contain products with affiliate links. If you make purchases using these links, we receive a small commission at no extra cost to you. Thank you for your support. Today we feature what many people consider to be the “unofficial” national dish of Bulgaria, the one and only shopska salad. It is a simple dish to make and it is delicious. Using everyday ingredients, you can make shopska salad in less than 10 minutes. Healthy, colourful and full of crunch, shopska salad features the great flavors of summer.

Bulgaria you say? Yes, it flies under the radar a bit being a former communist country in Eastern Europe. Did you know it borders Greece and Turkey (among other countries)? So it has some neighbors whose cuisines are very well known throughout the world. It does share some common foods with those aforementioned countries.

Did you know that many people consider Bulgarian feta to be the world’s best? We certainly find a lot of Bulgarian feta where we come from. Feta is one of the ingredients in our salad today, although it is not the traditional cheese used in Bulgaria. More about that later.

We can thank the former communist regime for shopska salad. There seems to no disagreement that the dish was born under their watch or should that be edict? So as you can imagine there is quite a recent history to this dish which we found almost as fascinating as the great taste of the salad. Read on to find out more.

The Communist History of Shopska Salad Bulgaria is one of those mysterious countries we never heard anything about as young adults growing up, except when they won medals at the Olympic Games! Bulgaria is in the heart of Eastern Europe and was a communist country from 1944 through 1991.

And yes in an effort to increase tourism in the 1960’s, chefs from Balkanturist, a government organisation, developed shopska salad and directed people eat the salad. The people adopted this salad spectacularly. Maybe that was because the colors of the salad – red, white and green make up the colors of the Bulgarian flag. Shopska salad was the only dish of 6 developed and promulgated by Balkanturist to actually survive past the communist era.

And like the colourful salad, Sofia, Bulgaria’s capital, is a rather progressive city with many attractive buildings and a food to match. Bulgarians are social people and we found them friendly and looking to show off their colourful, cosmopolitan city. Honestly some of the pre-communist architecture in Bulgaria is spectacular. And some of it dates back to the Roman era with Sofia providing many opportunities to view some spectacular ruins.

You will find shopska salad everywhere in Sofia and throughout Bulgaria. There is a reason it is so popular. Read on for the recipe. Similar to Greek village salad, shopska salad features strong, white cheese. In Bulgaria they use a hard brined cheese called sirene. It is similar to feta (in taste, but it is a hard cheese) and that is what we are going to use in our recipe today.

The other ingredients are red bell pepper, cucumber, tomato, salad onion, parsley. Topped off with a simple vinaigrette, it is a simple but tasty salad with a bit of attitude provided by the feta.

I hope enjoy the salad. You can read more about Bulgaria, what to see and do, here. 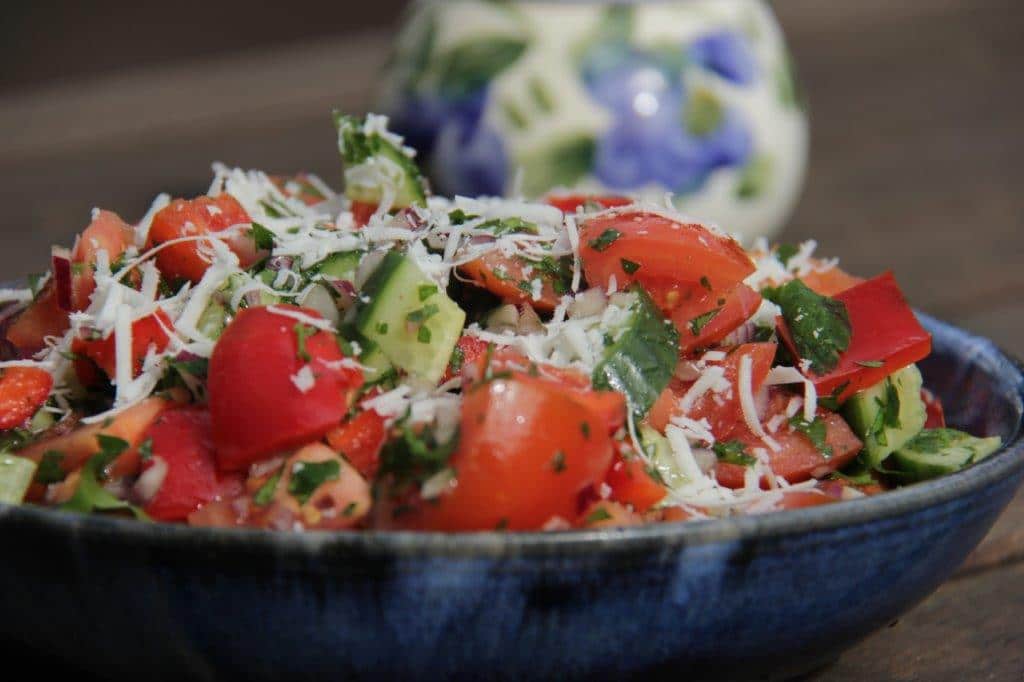 Shopska Salad from Bulgaria is the Perfect Choice
Here is a simple salad using every day ingredients to deliver a fresh, healthy and tasty starter or side salad.
Ingredients
Servings: people
Units:
Instructions
Recipe Notes