Home » How to Make Easy Greek Rice Pudding on the Stovetop
Required Disclaimer: This post may contain products with affiliate links. If you make purchases using these links, we receive a small commission at no extra cost to you. Thank you for your support. Looking for creamy rice pudding? Why not try this easy Greek rice pudding, a simple recipe you can make on the stovetop. And, you can make it in advance and then just leave to chill in the refrigerator, making it very convenient if you have guests. It’s also a gluten free rice pudding which delivers a creamy result!

I researched the background and history to Greek rice pudding and I was surprised. Do you know how popular creamy rice puddings are right around the world? Well I wasn’t quite prepared for how many versions of stovetop rice puddings there are! And, then there are the oven versions of rice pudding recipes as well. But, of course rice is used more around the world for savory dishes than rice dessert recipes. So with that in mind, I am going to spend a little time writing about how different cultures use rice.

Rice is such an amazing ingredient which people from many countries around the world consume in large quantities. While rice may have originated in Asia, it has become a staple in many countries. And, why not? It is cheap and plentiful, and you can use rice to make sweet dishes, like this Greek rice pudding recipe and savory dishes to enjoy at breakfast, lunch or dinner. And the number of rice varieties now is staggering. It is almost as if there is a specific rice these days for particularly dishes. What a great world we live in!

Read on to see how we all enjoy rice around the world.

Rice All Around the World

I think we all know that rice originated thousands of years ago in Asia. From southern China in a broad arc stretching to eastern India, and incorporating northern Vietnam, Laos, Thailand and Myanmar. Marco Polo is widely accredited with returning with the grain from where it spread throughout Europe. Rice gradually spread to the Middle East and Greater Asia. The Spanish and Portuguese explorers and settlers brought the grain to South and Central America. We all know that rice forms the basis of most meals in Asian cultures. But just consider all of the other great dishes utilizing rice. For example:

Risotto is such a famous dish in Italy. Utilizing arborio or carnaroli rice, both fatter grains absorbing the stock as it cooks. There are all sorts of risottos but one of our favorites is mushroom risotto made with chicken stock.

Have you tried a pilaf? It is very popular in the Middle East and eastern Europe. Alexander the Great was a great lover of pilaf. Like risotto, you also cook a pilaf in stock but you add dried fruits like currants and nuts, like pistachios. Delicious, and you can read more about pilafs here as well as a great pilaf stuffing for roast chicken.

On the Indian subcontinent, it’s all about biryani. A Muslim dish which is similar to pilaf but which contains meat or egg and more spices. It’s worth seeking biryani out at your local Indian restaurant.

Moving back to Europe and Spain in particular, there are two magnificent, rice dishes worth trying. Paella is well known, originating in Valencia, Spain. It uses calasparra rice, but there are also other, paella rice varieties available. You cook paella in stock and one of the spices includes saffron threads. Toppings vary, much like the different varieties of pizza or risotto. A good paella is divine with a great depth of flavor! Another famous, Spanish dish is Arroz de Negro. Simply rice cooked in cuttlefish ink, it is jet black and has a strong flavor that doesn’t leave you wondering!

And for a cold rice dish, let’s not forget sushi, which is exploding in popularity right around the world. And, why not? Sushi is healthy, light and I would say refreshing. You feel good after eating sushi. It can be vegetarian, feature cooked and raw ingredients, including many varieties of fresh fish and shellfish.

And circling back to where it all started, fried rice makes a satisfying meal, just full of little morsels of vegetables and meats as well as sauces for flavor. So popular throughout China and South East Asia, it’s easy to make and you can basically add whatever you feel like to the rice.

And like savory dishes, there are different versions of rice pudding!

Rice Puddings Around the World Out of ignorance, I always assumed rice pudding was a very English thing, resulting from growing up in Melbourne in the 1960’s. Creamy rice pudding was very popular in our house and I assumed it was because of our English heritage.

But in researching this dish I realized I was wrong. (which is what happens when you assume!) Rice pudding is popular in many cultures. It is particularly popular in West Asia, the Middle East and North Africa, right throughout Asia and Europe, particularly in Eastern Europe and the Nordic countries. Also in Latin America, Canada and the USA, and yes, indeed, it is very popular in the UK. You can read how popular a rice pudding recipe is just here.

So, it is the Greek version of stovetop rice pudding for us. Here is the recipe.

How to Make Easy Greek Rice Pudding on the Stovetop

Greek rice pudding is a very simple recipe to make. Given our trip around the world of rice, you might be wondering, which rice pudding rice should I use. If you want a creamy rice pudding I would make it with risotto rice (arborio). Yes, a risotto rice pudding sounds good doesn’t it? It’s a good rice to use because it is a fatter grain which absorbs the creamy, vanilla flavor.

For our stovetop rice pudding, I am using vanilla essence. You can just as easily use the seeds from a vanilla pod if you prefer. That will no doubt deliver a stronger vanilla taste to the rice pudding but it results in having small, black specks throughout your pudding. Either option works well.

We serve our Greek rice pudding cold, which makes it perfect for preparing in advance. You can also enjoy your stovetop rice pudding warm, should you so desire.

And one final tick for this dish- it’s gluten free! 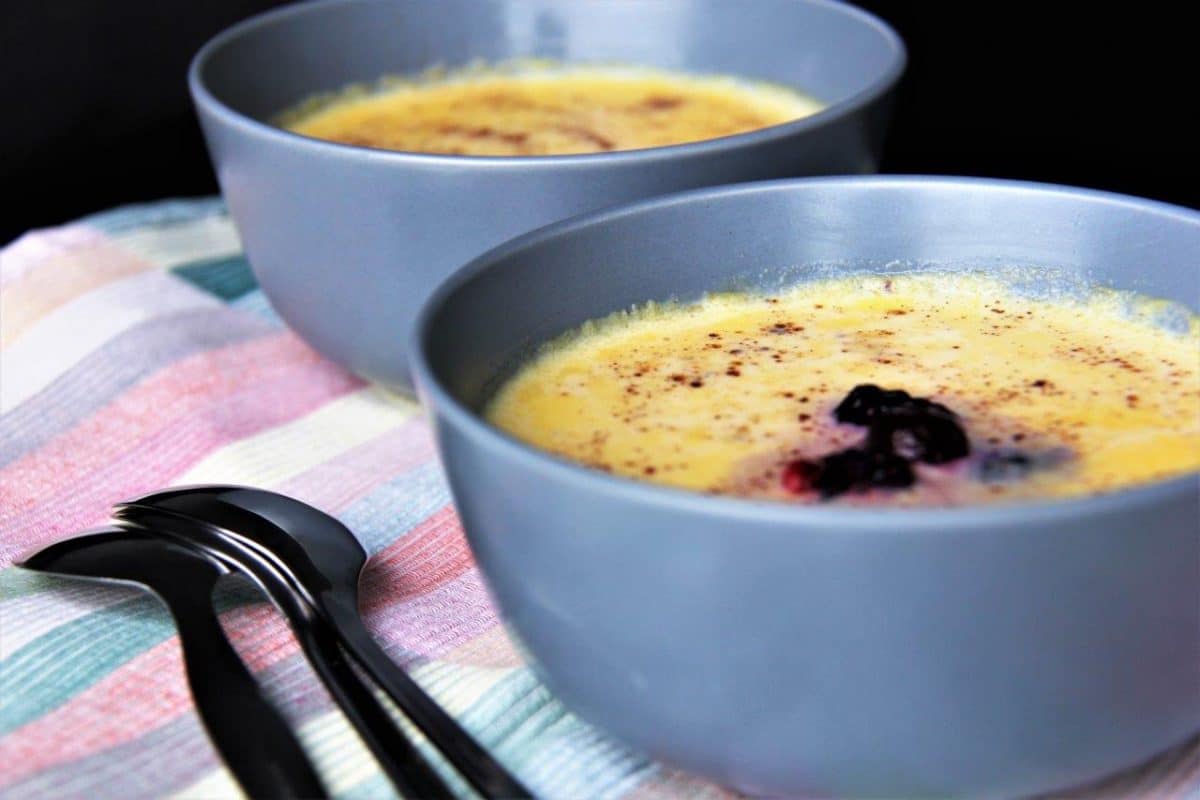 How to Make Easy Greek Rice Pudding on the Stovetop
Just watch you don't burn the milk and make sure it comes to a slow boil.
Ingredients
Servings: people
Units:
Instructions