Home » The Best Peruvian Scalloped Potatoes Recipe Ever
Required Disclaimer: This post may contain products with affiliate links. If you make purchases using these links, we receive a small commission at no extra cost to you. Thank you for your support. Looking for a variation on French potato classics like Scalloped Potatoes or even Potatoes au Gratin? Today we look to the home of the potato for some inspiration. Peruvians know a thing or two about potatoes so why not prepare them Peruvian-style?

As well, we have a short take on the history of the potato and how the Incas employed agricultural techniques in the Andes to provide not only this vegetable year-round but many others as well. The agricultural methods of the Inca’s were ingenious and were a major reason the Inca empire became the largest in the Americas.

It’s no secret that Peru is the home to the potato. Maybe you are also aware quinoa is another ancient Inca food which has become extremely popular world-wide in the last decade or so.

Another food we should thank the Incas (and Mayans) for, the humble tomato. And then there was corn, squash, I could go on. Has any other country given more food to the world than Peru?

The point is that the Incas were ingenious in developing agricultural methods for the domestication of wild fruits, vegetables and grains, that could be grown and stored for year-round consumption.

It sounds easy enough if you are blessed with these wild foods and have arable land to develop and harvest them. But that was not the case for the Incas. Much of the territory controlled by the Inca empire was either in the Andean altiplano (extremely dry with little or no water) or in the rugged, very high altitude Andes themselves.

The Incas were masters at developing methods for growing crops, particularly in the Andes mountains themselves. They were also brilliant strategists to grow and maintain their extraordinary empire.

Like the Romans, they developed a network of roads or trails (camini). This allowed the empire, the center of which was Cusco in modern-day Peru, to quickly transfer messages, via a series of couriers (a bit like a long-distance relay) from outer-lying lands to Cusco.

A happy population is a well-fed population and the Incas were smart enough to realize food needed to be freely available to the general populace. And the food was shared. Not only could the Incas grow crops in the most unlikely of places they developed methods to preserve vegetables and fruits when in season and then stored them in a network of storerooms along the camini. For example, potatoes could also be grown on the altiplano where it is hot during the day and below freezing at night. To preserve them, the picked potatoes were squeezed to remove moisture and then left out in the sun where they dried out. They remained outside overnight where they basically froze.

They could then be stored for later use. Is this the original freeze-dried method? And they were smart. The Incas decreed  potatoes could not be peeled. They did not want to create a litter problem and they knew all of the nutrients were just under the skin!

When walking the Inca Trail to Machu Picchu you see large tracts of land put aside by the Incas for agriculture. You can see them miles in the distance and they are massive in scale in the most remote and rugged settings. We were lucky enough to walk through some of these fields as well as to observe the network of store rooms developed by the Incas. It is incredibly impressive given the landscape, the remarkable terracing and age of the fields. It was no wonder the Inca empire was so powerful.

But that’s enough of history, what about potatoes today in modern Peru?

In the markets potatoes are everywhere and still form an important part of the diet of Peruvians. Peruvians love baking them with cheese, evaporated milk and/or eggs.

Peruvian Scalloped potatoes are popular as they cook more quickly and it is easy to add other ingredients to the baking dish to add a bit of luxury and heartiness. Here is our take on Peruvian scalloped potatoes. It is an easy recipe to make and there is a richness to the dish making them filling. They go perfectly with Stuffed Rocoto (Peppers) which we will be featuring shortly. Subscribe to the newsletter below or on the sidebar to never miss an update.

If you are looking for more information about Peruvian food and travel, you might also enjoy: 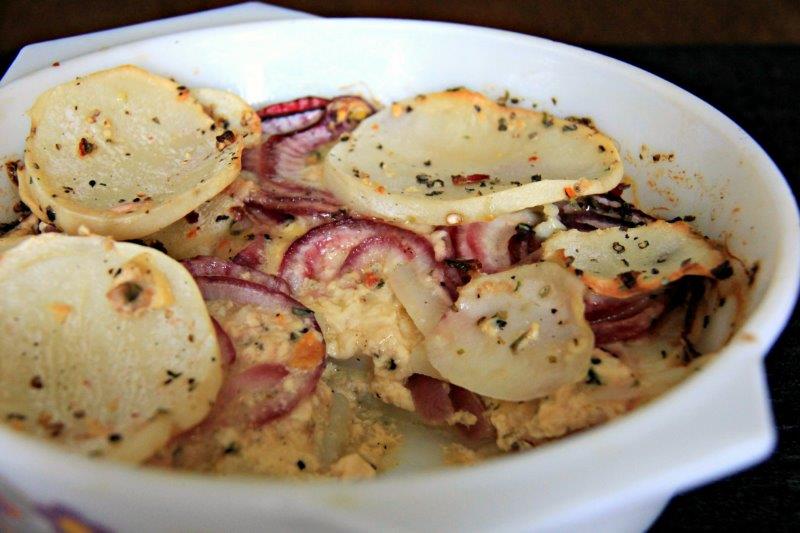